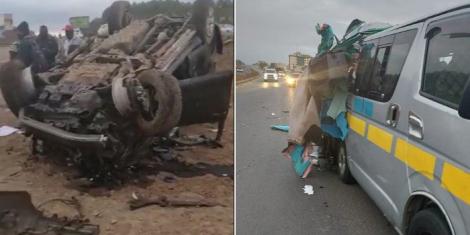 Kamakis road accident that happened early Sunday was allegedly caused by a drunk driver. From the eye witnesses, the driver hit a Tuk Tuk and Matatu before rolling.

The accident claimed three people’s lives. Among them was an innocent 11 years old boy. The Kamakis road accident happened at Kamakis which is along the Eastern Bypass.

Some of the passengers who sustained injuries were rushed to Kenyatta Referral Hospital where they are said to respond positively to medication.

The driver who caused the Kamakis road accident today on Sunday, 6:45 am morning is arrested and held at Ruiru police station.